This police drama that exposes confidence rackets debuted on June 7, 1951, and ran until Sep. 28, 1953. Actual police cases describe how shady characters fleece unsuspecting people of their money. Reed Hadley stars as Capt. John Braddock, who both introduces each story and plays a part. 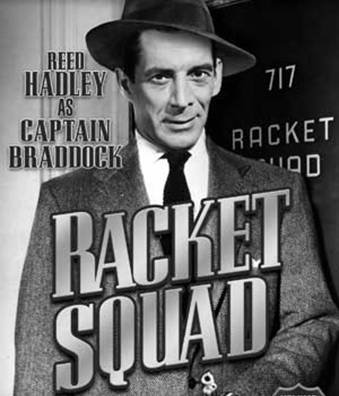 Elephant in Stockings 12/12/1952 Captain Braddock tries to take down a mob boss.
The Hearse Chaser 2/28/1952 Capt. Braddock tries to locate a pair of swindlers who are trying to fleece a recently widowed lady out of three thousand dollars for a worthless portrait of her late husband.
Home Wreckers 3/13/1952 A man impersonating a lawyer swindles money from divorcing couples.
The System 1/1/1953 Captain Braddock investigates a man selling a fake system for betting on horses.

The Long Shot 7/3/1952 Another con falls into Captain John Braddock' s lap. A gang of thugs sell fake tickets for the Irish Sweepstakes.
Desperate Money 1/24/1952 Captain Braddock investigates a complaint made by an immigrant tailor who is beaten by a loan-shark.
Check and Double Check 9/4/1952 A gang uses kids and stolen checks to get money and merchandise from stores and it's up to Captain Braddock to stop them.
Figures Don't Lie ("Sale Value”) 7/20/1953 An auditor falsifies books of successful companies so as to buy them cheaply.

Smoke Eater 8/17/1952 Aka. “The Strange Case of James Doyle” Fake fire captain extorts money so businesses are not shut down.
Anyone Can Be a Sucker 7/31/1952 Girl takes bookie, who seeks revenge.
Blessed Expense 11/20/1952 Fradulent insurance for pregnancy.
The Staff of Life 3/27/1952 Fake wheat contest to steal wheat.

Two Little Country Girls 6/28/1951 Assistant hotel manager Harvey Anderson accuses a bellhop of stealing $15,000 from a guest, but it may be a con woman who has tried this before.
Pick a Number 8/14/1952 A meek clerk discovers that the numbers he releases at the clearing house where he works are the ones used by men running a numbers game.
The Sure Thing 9/7/1953 Braddock tries to break a bookmaking operation.
The Christmas Caper 12/25/1952 The story of conmen who take advantage of an elderly man whom they hire as a sidewalk Santa. The money he raises goes into their pockets, and not to charity as he had been told.