(1954-1956) Ceasr Romero plays a suave, quiick-witted diplomatic courier who travels to distant countries each week with important communiques to America's allies and dodges enemy agents along the way. 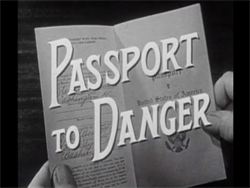 Teheran Steve arrives in Teheran to meet an old friend, but is greeted by a bullet and the news of his friend’s death.
Casablanca Steve and his lady friend walk into an uprising and become prisoners.
Budapest A Hungarian priest passes valuable information to Steve in prison.
Sofia Steve tries to buy his freedom from the Hungarian secret police.

Turkey Steve helps the children of an escaped Rumanian industrialist.
Geneva Steve stumbles upon a Russian assassination plot.
Monte Carlo Steve helps an injured foreign service agent recover photos of a corrupt politician who frequents a casino.
Prague Steve helps a Czech skating star escape from Prague so she can rejoin her husband.

Rome While in Rome investigating the leaking of classified documents from the American Embassy, McQuinn stumbles upon a German counterfeiting plot.
Tangier Steve encounters a femme fatale spy at a countess’ party.

Back to Adventure TV