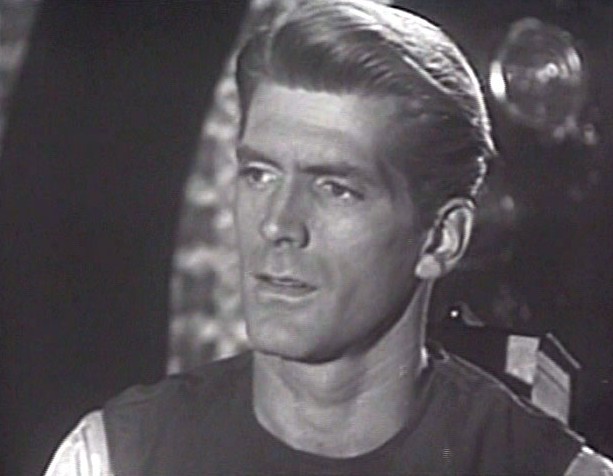 Planet of Death First show in the series.
Akim the Terrible King Akim rules over a planet where cruelty, hate, and lawlessness are virtues and murder is commonplace. A G.B.I. agent is sent to investigate, but Akim the Terrible brainwashes him and orders the agent to assasinate Flash Gordon.
The Claim Jumpers
The Breath of Death

Return of the Androids
The Lure of Light
Deadline at Noon An enemy of Earth uses the principles of Dr. Zarkov's time machine to travel back 1250 years and plant a powerful bomb in 1953 Berlin. Flash, Dale, and Dr. Zarkov have less than one hour to find the bomb and defuse it.
Race Against Time There is to be a crucial vote on Mars to decide if the Galaxy Bureau of Investigation will continue. Flash, Dale and Zarkov have a stake in this because they work for the G.B.I. But three criminals, who don't want Commander Richards to get there in time to cast Earth's deciding vote, use a ray machine to force the Skyflash to make an emergency landing on planetoid Epsilon 30.

The Witch of Neptune Part 1 of a 3 part story featuring the villainess Zydereen.
The Brain Machine After Flash and Dale foil her plan to destroy Neptune by repairing the auxilliary air converter, Zydereen uses stolen technology to transport Dr. Zarkov and Commander Richards to her castle on the planet Saturn, where she hooks them up to a machine that will drain all the important scientific and strategic military information from their minds, all part of her plan to conquer the entire Galaxy.
Struggle to the End Zydereen plans to hijack the galaxy's principal store of the energy source corillium. Flash and Dale must find her and destroy the electro-brain recorder that holds the combined knowledge of Dr. Zarkov and Commander Richards.
Saboteurs from Space

Forbidden Experiment Dr. Zarkov receives a call from Dr. Fabian Prentiss, an old friend who has been missing for years. Prentiss is on the planet Zeta N1 and asks Zarkov to bring him some serum. When Zarkov gets there he finds his friend is dead and that Prentiss's fiendish experiments have created a Lion Man who can command all the animals in the jungle.
Subworld Revenge Flash learns that the survivors of the underworld kingdom that he thought he had destroyed in episode 35, "The Earth's Core," seek revenge on the "surface people."

Back to Sci Fi TV Shows