(1950-1955) Aka. "Treasury Men in Action." A squad of Treasury Department agents, headed by "The Chief", go after counterfeiters and other criminals who commit crimes that fall under the Treasure Department's jurisdiction. 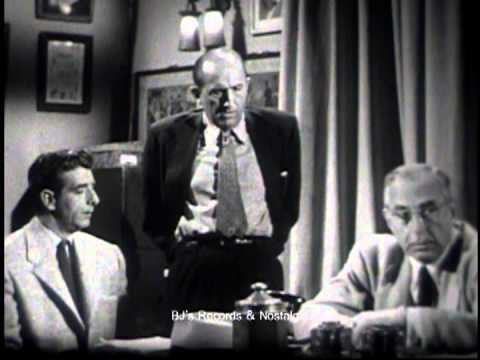 Vol. 1 The Case of the Iron Curtain 1/20/1955. The T-men track airplane parts to behind the iron curtain where they're being sold.
The Case of the Fatal Error 2/3/1955.
The Case of the Black Sheep 3/31/1955. After becoming interested in mobster's girl, the son of a sugar distributor gets hooked up with a gang selling illegal liquor.
The Case of the Ready Guns 5/26/1955.

The Case of the Frightened Man 6/24/1955. A man buys an interest in a lacquer works to have access to denatured industrial alcohol, which he sells in violation of tax laws. But a fourteen-year-old boy leads federal men into a showdown meeting with him.
The Case of Swindler’s Gold 2/24/1955. Criminals try to sell gold coins that are 85% lead inside. Stars Jesse White.
The Case of the Buried Treasure 1954. Rather than placing his cash in the bank, a man attempts to hide his earnings from the IRS by burying the money in a barn.
The Case of the Little Tin Box 11/18/1954. Three people running an all-cash nightclub attempt to evade income taxes by skimming money from the cash register.

The Case of the Green Feathers 11/25/1954. United States Customs agents go after racketeers who are smuggling rare parrots across the US-Mexico border.
The Case of the Princely Pauper 2/17/1955. Customs suspects a young man, who is obviously living beyond his means, of smuggling jewels in from Europe. The officials search his bags carefully after every trip, but can find no hidden jewelry.
The Case of the Desperate Men 12/9/1954. Charles Bronson and Aaron Spelling are escaped convicts who make their way to St. Louis.
The Case of the Deadly Dilemma 3/24/1955. An undercover Secret Service agent joins the gangster underworld to uncover a counterfeiting ring. His position is threatened when he is given a contract to "rub out" a man, which of course he cannot do! This episode also stars Charles Bronson.