(1954-'55) All 39 episodes of the British TV series aka. "The Adventures of Sherlock Holmes. The adventures of master detective Sherlock Holmes (Ronald Howard) as he and his assistant, Dr. Watson (H. Marion-Crawford) and, somewhat reluctantly, the bumbling Inspector Lestrade (Archie Duncan) battle criminals in London. 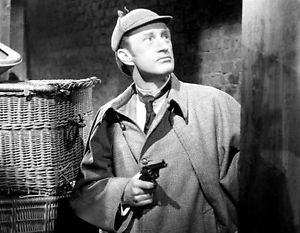 The Case of the Cunningham Heritage Oct. 18, 1954. First show in the series. The first part of the show is a faithful retelling of Holmes and Watson's meeting as in "A Study in Scarlet" until Holmes invites the good doctor to their first murder investigation. Lastrade has it all wrong, of course, picking the most likely suspect, Peter Cunningham's secret bride, a "jailbird".
The Case of Lady Beryl Oct. 25, 1954 Visiting a home of high nobility, a businessman is murdered. Lady Beryl has confessed, which satisfies Scotland Yard, but not Holmes. He suspects she is covering something up, and he digs deeper, finding valuable clues.
The Case of the Pennsylvania Gun Nov. 1, 1954 Holmes and Watson travel to the Sussex countryside to fish -- literally -- for clues in a shotgun murder of John Douglas, what Holmes calls "The Case of the Other Dumbbell." He not only deduces who the murderer is, but also who the victim is.
The Case of the Texas Cowgirl Nov. 8, 1954 Minnie, a cowgirl from a travelling western show, visits Holmes after she finds a dead body in her room. Afraid that a scandal would endanger her marriage plans, she asks Holmes to help her move the body.

The Case of the Belligerant Ghost Nov. 15, 1954 When Dr. Watson thinks that he has seen a ghost, it puts Sherlock Holmes on a trail that leads to a crime at an art museum.
The Case of the Shy Ballerinav Nov. 22, 1954 Dr. Watson accidentally comes home from his club with another man's coat, providing an important clue when the other man is murdered late that same night.
The Case of the Winthrop Legend Nov. 29, 1954 Sherlock Holmes seeks a rational explanation for the Winthrop family legend, which foretells the death of any family member who unexpectedly finds silver coins in his possession.
The Case of the Blind Man’s Bluff Dec. 6, 1954 Inspector Lestrade looks to Holmes for answers after two men are murdered on separate occasions. The common clue? A chicken's foot, bound by a black ribbon, sent to each victim before his demise.

The Case of Harry Crocker Dec. 13, 1954 Vaudeville escape artist Harry Crocker turns to Sherlock Holmes for help when he is accused of strangling a chorus girl.
The Mother Hubbard Case Dec. 20, 1954 Margaret Martini's finacee has gone missing, but the trail to his whereabouts after escorting a little lost girl home leads to seven other murders and a very unlikely murderer. Holmes tries to feed divinity fudge to a canary.
The Case of the Red-Headed League Dec. 27, 1954 Sherlock Holmes investigates a strange story told to him by a shopkeeper, who claims to have been a member of the 'League of Red-Headed Men' until it unexpectedly dissolved.
The Case of the Shoeless Engineer Jan. 3, 1955 Holmes and Watson encounter a badly injured man who is carrying an unconscious young woman. Their tale leads to counterfeiters.

The Case of the Split Ticket Jan. 10, 1955 Two people, who share a winning sweepstakes ticket with a third party, come to Holmes for help since the ticket must be turned in by midnight.
The Case of the French Interpreter Jan. 17, 1955 A French interpreter tells Holmes how he was abducted to persuade a Frenchman to sign some valuable papers.
The Case of the Singing Violin Jan. 24, 1955 Betty is tormented by apparent hallucinations, the latest of which she refers to as a 'singing violin.' Her stepfather brings her fiancé to see her and tells the young man Betty is going to be declared insane. The fiancé goes to consult Sherlock Holmes, but is murdered.
The Case of the Greystone Inscription Jan. 31, 1955 Holmes and Watson are called to investigate Miss Channing's missing financee, who apparently discovered the secret to a hidden treasure of King Richard II, which Laird Greystone wants to keep at any cost.

The Case of the Laughing Mummy Feb. 7, 1955 Sherlock Holmes helps one of Dr. Watson's old friends by explaining the source of an odd noise in the man's home, but in doing so Holmes uncovers a more serious mystery.
The Case of the Thistle Killer Feb. 14, 1955 Sherlock Holmes helps Scotland Yard to track down a killer who has been leaving three thistles next to each of the women he has murdered.
The Case of the Vanished Detective Feb. 21, 1955 When Sherlock Holmes disappears, Dr. Watson and Inspector Lestrade begin a search that leads them to a small shop.
The Case of the Careless Suffragette Feb. 28, 1955 A zealous suffragette acquires a bomb shaped like a croquet ball, intending only to draw attention to her cause, but it is switched with a real croquet ball and explodes, killing a member of Parliament.

The Case of the Reluctant Carpenter March 7, 1955 Holmes races against time in order to find the location of a bomb planted somewhere in London by an extortionist.
The Case of the Deadly Prophecy March 14, 1955 Holmes and Watson are called to a boy's school in Belgium. It seems that a young student has gotten into the habit of writing the names of faculty members on the steps of a nearby church, and shortly afterwards person whose name has been written down is found dead.
The Case of the Christmas Pudding April 4, 1955 When a serial killer is sentenced to death, he issues a threat that he will kill Sherlock Holmes before he himself is executed.
The Night Train Riddle April 11, 1955 A young boy and his father are traveling on a train, and after they have a fight, the boy runs out of the compartment and seems to have vanished into thin air. Although his governess thinks he has simply run away, Holmes begins to suspect something a bit more serious.

The Case of the Violent Suitor April 18, 1955 An advice columnist, Alex Doogle, advises a young woman to break up with her violent and insanely jealous boyfriend. The jilted boyfriend then beats Doogle, who turns to Sherlock Holmes, both for his own protection and to save the young woman from her crazed fiancé.
The Case of the Baker Street Nursemaids April 25, 1955 A baby is left on Holmes' and Watson's doorstep. The child turns out to be the son of a missing French scientist. When Watson is later brutally attacked and the baby kidnapped, the detectives must find the baby and its father and avoid an international scandal.
The Case of the Perfect Husband May 2, 1955 Russell Partridge announces to his wife Janet one day that he is in fact a killer and she has one day to get her affairs in order before he murders her. Janet can get no one to believe her tale, except Holmes and Watson, who must devise a plan to trap the killer.
The Case of the Jolly Hangman May 9, 1955 A traveling salesman is found hanged in his hotel room. Although the police eventually rule it to be a suicide, his widow thinks otherwise and asks Holmes to investigate the mysterious "suicide" further.

The Case of the Imposter Mystery May 16, 1955 Holmes and Watson return from a vacation to find an impostor Holmes has misadvised Lestrade to guard Hambleburg's, not Carrolton's, jewelry store and Sir Arthur to hide his valuables in the biscuit jar.
The Case of the Eiffel Tower May 23, 1955 After a famous criminal is run over and killed by a milk truck, Lestrade finds a coded note in the man's clothing. He asks Holmes to decipher it, and Holmes' subsequent investigation leads him to assume the dead gangster's identity and follow a trail of clues to Paris.
The Case of the Exhumed Client May 30, 1955 Sir Charles Farnsworth is found dead in his mysterious Farnsworth Castle. It turns out that Farnsworth had a clause inserted in this will that his death, no matter what the apparent cause, would be investigated by Sherlock Holmes.
The Case of the Impromptu Performance June 6, 1955 A condemned man scheduled to hang the next day uses his last request to ask Sherlock Holmes to prove his innocence of the murder for which he is about to be executed.

The Case of the Baker Street Bachelors June 20, 1955 A political leader is being blackmailed, and to find the blackmailers, Holmes and Watson join a lonely hearts club. However, things don't go quite as planned, and Holmes winds up getting arrested and thrown in jail.
The Case of the Royal Murder June 27, 1955 As payment for solving a case, Holmes and Watson are invited to spend a weekend at an estate in the Balkans. However, their vacation is cut short when another guest, Prince Stefan, is poisoned and their host is accused of the murder. Holmes must find the real killer.
The Case of the Haunted Gainsborough July 4, 1955 This is the story of the hunt for the MacGregan treasure -- and curse. The villain would be the castle's foreclosing morgage holder, Archibald Ross.
The Case of the Neurotic Detective July 11, 1955 Holmes begins acting even stranger than usual -- he tries to keep Watson from seeing the diamond necklace in his humidor, refuses to help Lestrade with the crime wave, dresses up to go with a Miss Jennifer Ames to a dance!

The Case of the Unlucky Gambler July 18, 1955 A young boy shows up at Baker Street, asking for Holmes' help in finding his missing father. Holmes' investigation reveals that the man is a gambler on the run from his creditors, and the team begins to make the rounds of the seedy gambling underworld in search of the boy's father.
The Case of the Diamond Tooth Sep. 19, 1955 While walking along the banks of the River Thames, Watson finds a diamond tooth. The article takes on more meaning later, however, when Holmes learns that the body of a murder victim had been discovered near where Watson found the tooth.
The Case of the Tyrant’s Daughter Oct. 17, 1955 A chemist is accused of the murder of his fiancé's stepfather, who was determined to keep the two apart. Although there is mounting evidence of the chemist's guilt, Holmes is requested by the old man's housekeeper to investigate The Case, as she believes the young man to be innocent.